I don’t trade Bitcoin, but I follow the news and developments with crypto currencies preaty much. What was interesting for me in about month ago were the headlines of the possible Bitcoin and other crypto currencies crash in the coming period. Everybody was writing about the same thing, the Bitcoin ‘will crash’ soon. Of course, such a headlines, which were on the top of the news in June/July forced most of the traders to sell the crypto currencies, which caused the additional fall of the Bitcoin from $2,400 to aprox $1,800. Sure, ‘the big boys’ were ready there to fill up their bags and they push the same back and way above the previous high ($3,000) to aprox $4,000. Such a developments are usualy with purpose to make a bigger story from it, so watch it furder. This could be just a beginning. 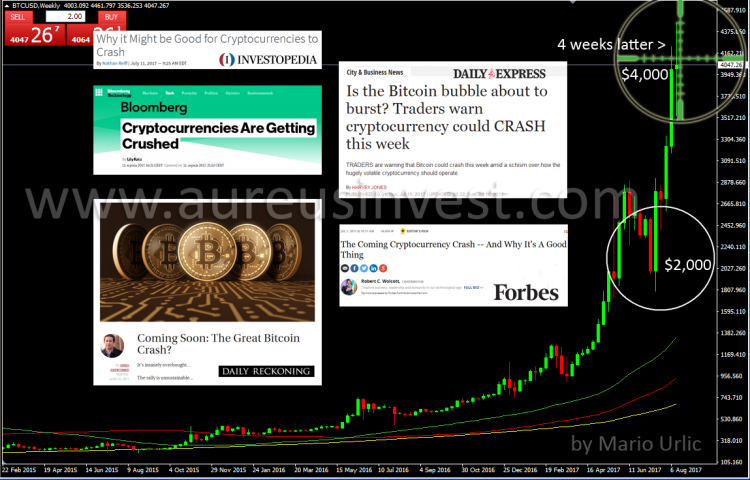 I always said, when all media and most of the analysts starts to write about something spectacular, it will happen opposite of that. On March 04. 2015 I wrote a short article about that, and based on similar headlines and predictions I have found and predict the EUR/USD technical bottom and reversal point at 1.0500 on March 11. 2015. Always think of that when everyone start to talk about it, maybe it’s time to consider the possibility of the opposite development!

Please, share your view or experience with us Cancel reply